In this blog, I wanted to talk about the specifics of the SOT “Bob Keller Signature Rifle” and the reasons why I chose each individual part on the rifle.

Over my career in special operations, I have shot many different brands of modern sporting rifles (AR15/M4s). I can’t even begin to list them all.  In my opinion, they are all virtually the same (except minor things).  So when I began to develop a signature rifle, I had a list of requirements, but the most important requirements I had was – it must be reliable, and it must stay on target.

When I talked to Special Ops Tactical (website SpecialOpsTactical.com) I knew I found the rifle I wanted to put my name on. Here is the what and why.

The barrel is the magic of the entire rifle. The  patented ‘siphon’ barrel technology makes the rifle shoot better than any other blaster I have ever been behind. SOT has a patent on the gas port. It is angled, smaller, and uses a rifle length gas tube – which ultimately means less recoil.

Combined with the SOT inferno muzzle brake, which mitigates muzzle climb, this gun is by far the ‘flattest and lowest recoil’ shooting gun I have ever laid my hands on.

Why does shooting ‘flat and low recoil’ matter in real life…?  When you take a shot, the less your gun moves, the less you have to adjust the rifle for your second, third, fourth shot.  With my rifle, even if you have a so so stance and grip, the gun stays on target – and you can continue to do work on your target/threat with very little adjustment between shots.  Game changer.  As a matter of fact, look at how well the muzzle brake works in the picture below.  You can see the gas going to the sides and straight up – which keeps your red dot/muzzle on target!!

CQB – no problem, a ready up is the same whether the barrel is 10in or 16in – go into the room, get the gun up, sight picture, and bang.

Long distance – I want to be able to make longer shots with the same rifle that I do CQB with.  The target is 200 yards, OK…my rifle can easily do that.  If you go with a shorter barrel, I do not think it is worth the gain in maneuverability for the distance capabilities that you will lose.

I wanted the rifle to be light.  Trust me, I have been on LOOOOONG missions, and carrying around a heavy rifle is not fun!  I selected the lightest components I could while keeping reliability.  Barrel – medium profile, and 14.1 inches keeps it light.  The handguard, only has picatinny where it matters, keeping it light.  The Magpul furniture I selected is also lightweight.  Light = better.

I am a huge fan of Magpul – why not ship the rifle with the best products as the main ‘touch points’ of the rifle?

Another important requirement I had (other than being different/better) was the fact that it had to be mil spec.  It is key to be able to have a gun that is reliable and can use off the shelf parts. Trigger, bolt, lower receiver, upper receiver, buffer tube/spring – all mil spec.

Reliability – is the key here.  If a rifle does not go bang when you pull the trigger – I am here to tell you it is not good in a gunfight!!!

Ready Out of the Box

I know that all of you work hard for your money.  When buying a rifle, it should come set-up straight out of the box.  Most rifles you buy require you to ‘add things’ which ultimately means dumping more money into the rifle.  I wanted the rifle to be battle ready right out of the box so we include:

As you can imagine, I have used and tested just about everything.  I decided just to keep it simple on my current set-up, so I am using a red dot. I am currently using the Leupold LCO and highly recommend it. The glass is clear, has a 1MOA dot, and it has a fantastic viewing window that does not make you lose awareness of what is going on around you. The LCO also has motion sensor technology, which makes it great for home defense. When you put the rifle down, the red dot turns off. When you touch it, the red dot turns on. Perfect for home defense. One last thing to note…it has the Leupold lifetime warranty…enough said.

Simply put this rifle is…bad ass!!  Let me know if you have any additional questions about why I chose what I did! 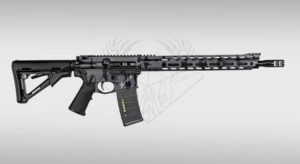 6 thoughts on “The Bob Keller Signature Rifle – My personal Overview”